Condos For Sale In Downtown Orlando

Downtown Orlando is known as the bustling home 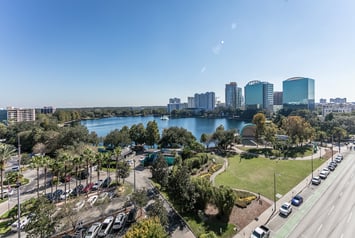 of The City Beautiful. Find condos for sale in Downtown Orlando and research local real estate market trends. Search new listings, scheduled open houses, recent solds, and price reductions in Downtown Orlando. To adjust how your search is displayed, click the gray arrows next to "Sort" to display Downtown Orlando homes in Orlando by price, number of bedrooms, or days on market.

If you would like to know more about any of these Downtown Orlando listings, just click the "Ask A Question" button when viewing the details of the property. We can provide you with past sales history, dates and prices of homes recently sold nearby, and more.

If you'd like to take a tour, click "Schedule A Showing." Set up and save your own custom home search by clicking the starred "Save" button to register for a free account so that you can receive email alerts whenever new Downtown Orlando properties come on the market.

The Downtown Orlando Central Business District has it all, from luxury highrise condos with views of the charming Lake Eola to traditional single-family style homes down its cobblestone streets. This prime location is known for its state of the art entertainment full of exciting nightlife, block parties, trendy farmer’s markets, fine dining, and world-renowned sports such as the Orlando Magic’s Amway Center and the Orlando City Soccer Stadium. Downtown Orlando is sought after by many young professionals working in this growing metropolis.

There are many different options for new developments as well as refurbished old historical homes. Some of the most known historical areas in Downtown Orlando are Lake Lawsona, Lake Copeland, Lake Cherokee, and Lake Eola Heights. There are several gentrification projects in process in Downtown Orlando that will result in an increase in the price of real estate in this area. If you are interested in investing in this area it is recommended that you do it sooner than later as prices have already started to reflect what this area will soon become.

Some notable new developments in this area are the new University of Central Florida Downtown Orlando Campus, Creative Village, Orlando Magic Complex, Church Street Plaza, X Orlando, GreenTree Development, and Zoi House. One of the most anticipated and largest new additions to downtown is Creative Village, this city within a city development is more than a decade in the making. It will be known as a mini-metropolis for students of Valencia College and The University of Central Florida. It will also feature a brand new 225 room hotel, 1,500 residential units, 1,500 student dorms. In addition, it will include a 1.2 million square feet of transformative office space, a beautiful park, and over 150,000 square feet of commercial and retail space. This new construction will give the city skyline two new major skyscrapers. One is a fourteen-story apartment with over 300 units and 10 floors of parking space as well as a 600-bed student dormitory building.   X Orlando will be the first of its kind mixed-use multifamily development on one parcel. This new construction will feature 889 apartments in three massive towers which will also include commercial and co-working office space. The purpose behind this development is to create the X brand, “social living community” concept to life.

In such a growing and innovative city like Orlando, we see this being a huge hit with our millennial residents looking for a place to call home.

Almost a dozen new high-rises are in the works for Downtown, according to city records. Zoi House is one of the major proposed projects, which will change Downtown Orlando’s skyline as it would be named Orlando’s tallest building by ten-floors upon completion. The Orlando Zoi House would include six floors of office-commercial space and as many as 300 residential units. The high demand for comfortable city living is very obvious with all the amazing new developments in the works for Downtown Orlando.

If you’re looking for a place to call home where you can live, work and play let us know. Downtown Orlando might just be the perfect place for you!